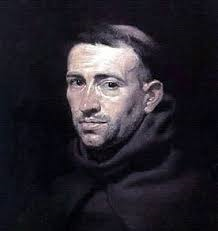 It’s a new year, therefore ‘tis the season on Wall Street for making end-of-year price predictions on everything from the S&P 500 to interest rates to an ounce of gold and a barrel of oil. The inaccuracy of such predictions is legendary and well-documented by our friends in the academy, so we won’t pile on here. Instead, our view on the utility of Wall Street’s short-term prognostications is best expressed by Shakespeare (as is so often the case): “A tale told by an idiot, full of sound and fury, signifying nothing.”

Or, if you prefer a more modern alternative to the Bard, take it from Warren Buffett: “I have never met a man who could forecast the market.”

Suffice it to say that we never do economic forecasting of any kind at Keating Wealth Management, because no one can forecast the economy in the short- to intermediate-term.   More importantly, it doesn’t matter for a multi-decade/transgenerational investor.

But you can’t build a rational long-term plan without access to long-term historical perspective about returns. And we know that over long periods of time, stocks have typically generated two to three times the real returns of bonds. So it was with great interest that I recently read an article in the Fall 2015 edition of The Journal of Portfolio Management. The piece was written by John C. Bogle, founder of the Vanguard Group investment firm, and is titled “Occam’s Razor Redux: Establishing Reasonable Expectations for Financial Market Returns.”

Sir William of Occam was a fourteenth century English Franciscan friar and scholastic philosopher whose “razor,” or law of parsimony, postulated that “the simplest solution to a problem is the solution most likely to be correct, and that problems should not be more complicated than necessary.”

The “redux” refers to previous articles by Bogle, published by The Journal of Portfolio Management in 1991 and 1995, about a simple methodology for establishing reasonable expectations for stock and bond returns over decade-long periods based on the sources of return that have driven their results.

In his 1951 honors thesis at Princeton, Bogle quoted a warning from John Maynard Keynes: “It is dangerous to apply to the future inductive arguments based on past experience, unless we can distinguish the broad reasons for what the past was.” Keynes attempted to explain the past by boiling down the source of stock market returns to two factors: enterprise and speculation.

Enterprise refers to the intrinsic value that businesses create (i.e., earnings), and speculation is effectively the fluctuations in valuation. But Keynes made no attempt to quantify these elements, so in his original 1991 article Bogle took on the task of attempting to establish a “reasonable expectation” for stock and bond returns for the ensuing decade. For his stock model, Bogle relied on just three factors; for his bond model, just one factor.

Bogle re-defined enterprise as “investment” or “fundamental” return, and expressed it as the sum of the dividend yield at the beginning of the period plus the annual rate of earnings growth that followed—in other words, the cash generated by businesses. Speculation, which he re-defined as “speculative” return, refers to the annual change in percentage terms of the price/earnings multiple during the period. So the expected total return on equities is simply:

And with over 125 years of data now available, it’s safe to conclude that the results are in. Since 1871, the annual investment return of stocks has been 8.6%. It’s been a steady, upward sloping trend line. By contrast, the speculative return has fluctuated wildly during the period, and the net annual addition to stock returns over the last century or so has been a mere 0.4%. So the 9.0% average annual return of stocks over the preceding century is almost entirely attributable to earnings.

So how has the Bogle model performed as a predictive tool? In short, reasonably well, with about an 81% correlation between actual and predicted returns over 10-year periods.

Bogle also came up with a single factor for predicting bond returns over the ensuing decade: the current yield (interest income divided by market price) at the beginning of the period. Looking at rolling 10-year periods going back to 1906, about 90% of the subsequent returns on bonds are explained by their initial yields. Capital gains and losses have almost no impact on return.

Burton Malkiel, in the 11th edition of A Random Walk Down Wall Street, reaches an identical conclusion: “Long-run returns from bonds are easier to calculate than those from stocks. Over the long run, the yield that a bond investor receives is approximated by the yield to maturity of the bond at the time it is purchased.”

So, according to the Bogle model, what’s ahead for stocks and bonds over the next decade?

As of year-end 2015, the dividend yield on stocks was 2.1%, which is less than half the average of 4.5% over the last century. And while the long-term nominal earnings growth has averaged 4.7%, over the past quarter century, the average has been 6.2%. So, in deference to the recent past, perhaps 6% might be a reasonable guess. This would bring the prospective annual investment return to 8% (2% + 6%).

With respect to speculative return, as of year-end 2015 the S&P 500 was trading at a multiple of 23.0x trailing earnings, compared to the historical average of 17.8x. Assuming a reversion to the mean valuation, this would imply a 22% contraction in the P/E multiple, equivalent to a reduction of about two percentage points per year over the next decade. So the 8% annual investment return would be reduced to 6% in nominal terms. Of course, the P/E multiple could also stay the same or increase, and actual earnings growth could be lower or higher than projected. The table below summarizes the calculation methodology, with rounded projected values based on the Bogle model. 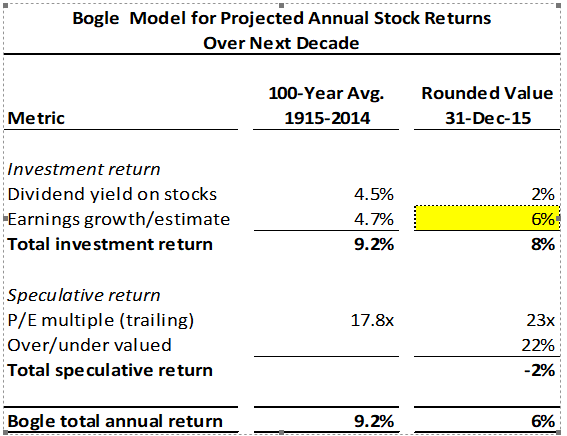 As of year-end 2015, the yield to maturity on the 10-year Treasury note was 2.3%, far below the long-term average of 5% (over the last century). Based on the Bogle model, this suggests a 2-3% average annual return, in nominal terms, over the next decade.

Sir William of Occam was spot on that the simplest solution is always the best.

So what are the takeaways here?