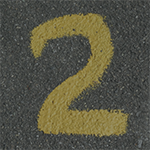 What if you threw a party but nobody came? That’s the way the stock market must be feeling these days.

The chart below helps put the current bull market in historical perspective, both in terms of duration and percentage change. As to the latter metric, this bull only ranks No. 4 (with a 216% increase as of the chart date of July 11). 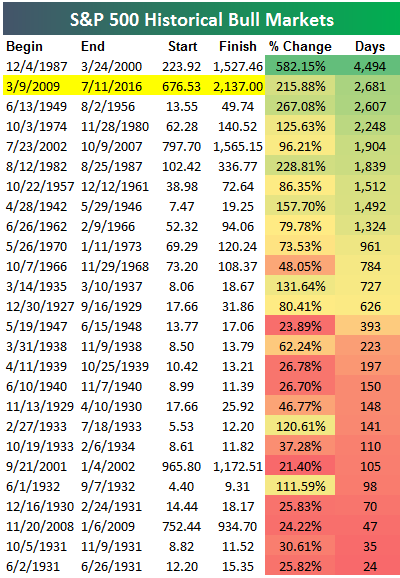 Perhaps because this bull market is not yet a “winner” in the eyes of many—pundits especially—it remains suspect. But there is no denying that the investing public is missing the party.

Consider this sobering data from Morningstar: From January through May 2016, investors liquidated an estimated net $52 billion from U.S. equity mutual funds and exchange-traded funds. And that was before the Brexit vote on June 23, 2016.

According to data from the Investment Company Institute (ICI), investors pulled nearly $8 billion from U.S. equity funds in the week post-Brexit. It’s been the same story all year.

And where is all that money going? ETFs that invest in emerging market bonds and junk bonds. Stay tuned for how that will work out. 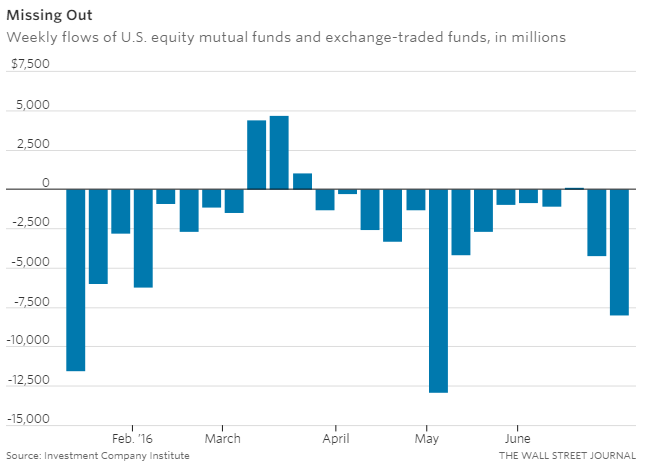 The Cost of Missing the Party

We constantly pound the drums about the folly of market timing. Trying to gain advantage by getting in and out of the stock market is a fool’s errand, if there ever was one.

We’re spoiled because we have so many ways to demonstrate this numerically. So in the spirit of non-discrimination, we’ll rotate the evidence. The object of our focus today will be the cost of being out of the market. And since we’re in 2016, we’ll focus on the number 6 in an effort to make this illustration more memorable.

Again, some historical perspective is required to put all of these numbers in proper context. Since 1926, large cap stocks have generated a total return of about 10% per year on average.

Had you been in the stock market—and remained fully invested at all times—since the last bear market bottom—you would have enjoyed an annual total return over these last 6 years almost 50% above average (14.6% compared with 10%). As always, past performance is no guarantee of future results.

But you have to be in it to win it. Sadly, too many investors who desperately need the returns to fund ever-increasing retirement periods have missed the party.

Behavioral biases can be categorized in many ways, and many of these categories may be overlapping or indistinguishable. So we will highlight only one behavior to make the point.

Narrow framing involves the evaluation of too few factors that may affect an investment, or making decisions without considering all the implications.

Investors are afraid and are pulling back. They don’t know what to do with their money as they wrestle with historically low interest rates, the uncertainty surrounding the next presidential election, and the disintegration of world order, among other worries.

So even though cash has provided no return and though the stock market is enjoying its second-longest bull market ever, investors keep selling stocks and refuse to join the party. A multi-decade (or even transgenerational) investor needs to think in terms of longer time horizons, and then sit back and enjoy the ride.