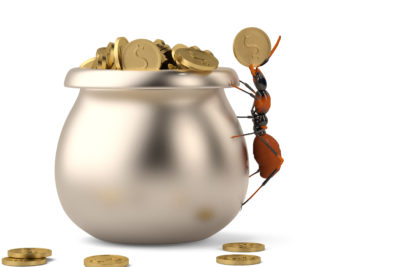 In the “Ant and the Grasshopper,” Aesop describes how a grasshopper spends the summer singing while an ant works to store up food for winter.  When winter comes, the grasshopper finds itself dying of hunger and begs the ant for food.  The ant reproves the grasshopper for its idleness and tells it to dance the winter away.  With this fable, Aesop imparts timeless moral lessons about the virtues of hard work and planning for the future.

In the millennia since Aesop’s death, there has been little evidence to suggest that humans have made any evolutionary progress in their ability to properly plan for the future.  To the contrary, many data points suggest that our species may have even slipped a few notches in the planning sphere over the last generation or two, particularly in today’s instant gratification world.  Nowhere is this more evident than in the realm of investing.

University of Chicago economist Richard Thaler has written several books for lay readers on the subject of behavioral economics, and one of his recurring themes is that market-based approaches are incomplete.  According to Thaler, “Conventional economics assumes that people are highly-rational—super-rational—and unemotional.  They can calculate like a computer and have no self-control problems.”

Thaler received the 2017 Nobel Memorial Prize in Economics for “incorporat[ing] psychologically realistic assumptions into analyses of economic decision-making.  By exploring the consequences of limited rationality, social preferences, and lack of self-control, he has shown how these human traits systematically affect individual decisions as well as market outcomes.”

This award completes the rise to primacy of behavioral economics that began 15 years earlier when Daniel Kahneman received the prize for his work with the late Amos Tversky, which revealed that people’s “intuitive expectations are governed by a consistent misperception of the world.”  When called upon to make judgments in uncertain situations, the human mind functions not just irrationally, but systematically so.  Perhaps more depressing, as Thaler says, “You basically don’t change anybody’s mind.”

Wall Street professionals like to make fun of individual investors for buying high and selling low.  But the “pros” are just as bad as the amateurs and make the same types of foolish errors.  Why?  It’s our brains.  It turns out that the human brain is horribly programmed for investing.

Your Money and Your Brain

In 2007, Jason Zweig, now a Wall Street Journal personal finance columnist, wrote a pioneering book about investor behavior:  Your Money and Your Brain.  He reveals, for example, that the brain activity of a person making money on investments is indistinguishable from that of a person who is high on cocaine or morphine.  This is one of hundreds of anecdotes Zweig covers in the book as he summarizes the relevant psychological, behavioral and clinical brain research over the last few decades.

Zweig builds on Kahneman’s distinction between the reflexive brain, which sits at the base of the brain and reacts quickly and intuitively to stimuli, and the reflective brain, which is located in the prefrontal cortex and can solve complex problems.  The trouble with human decision-making is that how people actually think and how they think they are thinking are not the same.  A vast body of psychological research has shown that people don’t really know how they arrive at the answers they get.

Instantaneous decision-making is the worst way to go about investing.  So how can people whose reflexive brains are firing like crazy operate more from their reflective brains?

According to Zweig, “The key is to become more mindful about what you are doing.  The more decisions you make, the more likely you are to be making them in response to emotional factors.  If investors made fewer decisions and instead acted only when their rules and policies called for action, they would be much less likely to decide on the basis of emotion.”  French philosopher Blaise Pascal hit the nail on the head when he wrote, “All the misfortunes of men come from only one thing:  not knowing how to remain at rest in a room.”

People seek financial advisers for help in planning and investing for the future.  But nobody can predict the future, and people should expect to be surprised.

We believe that history is the best guide—perhaps the only guide—to the long-term future.  We’ll never have all the information we want regarding what’s about to happen, because we invest in and for an essentially unknowable future.  Therefore, the rational investor thinks in decades (not days), relies on historical, long-term average returns to guide asset allocation decisions, and makes changes infrequently.

One of the most important jobs of an investment counselor is to help clients tolerate ambiguity and function rationally and effectively in the face of uncertainty—in other words, to continue acting on a plan rather than reacting to the markets.

So here’s what we can learn about Wall Street from Aesop’s grasshopper:  We can’t control the markets, but if we can control ourselves, we can become better investors no matter what the markets do.

Humans don’t know why they do what they do.  We are overconfident, we suffer from hindsight bias, we are terrible about judging probabilities, and the list goes on.  This can lead to disastrous consequences when it comes to financial decision-making.  The first step is to recognize that, as a human, you have many unconscious biases that can lead to mistakes and errors in judgment.  Then, ideally with the help of a behavioral-focused investment counselor, build a rational long-term plan and stick to it.  You should rarely make changes to your portfolio—typically only when necessary based on changes in your life, circumstances or financial goals.