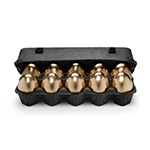 In his 2015 letter to Berkshire Hathaway stockholders, Warren Buffett—America’s most admired and least imitated investor—once again intellectually demolishes the conventional wisdom with a few simple numbers and some basic, but piercing, analysis. In this case, the subject was economic growth or, to be more specific, the putative lack thereof.

Apart from his imitable track record, what noticeably separates the Oracle of Omaha is his ultimate long-range perspective in a world that craves, nay demands, short-termism.

Among the many gems from this year’s letter, here is Buffett’s take on the outlook for the future: “As a result of this negative drumbeat [by politicians about the country’s problems], many Americans now believe that their children will not live as well as they do. That view is dead wrong. The babies born in America today are the luckiest crop in history.”

The luckiest crop in history? But aren’t we stuck in an economy that is incapable of anything but 2% GDP growth forever? And isn’t 2% growth basically tantamount to the stalling of America’s mighty engine of commerce, lumping us in with France and the other stagnant economies of Europe? In other words, isn’t the economic world coming to an end? Well, actually, no.

Here is Buffett’s logical analysis and the associated simple arithmetic that brilliantly eviscerates the false prophecies from the Cassandras in the financial media:

“America’s population is growing about .8% per year (.5% from births minus deaths and .3% from net migration). Thus 2% of overall growth produces about 1.2% of per capita growth. That may not sound impressive. But in a single generation of, say, 25 years, that rate of growth leads to a gain of 34.4% in real GDP per capita. (Compounding’s effects produce the excess over the percentage that would result by simply multiplying 25 x 1.2%.) In turn, that 34.4% gain will produce a staggering $19,000 increase in real GDP per capita for the next generation. Were that to be distributed equally, the gain would be $76,000 annually for a family of four.”

Because this analysis is so important, and because the elements underlying the calculation are easy to grasp, it is reproduced in the table set forth below for the reader to behold in all its elegant simplicity. 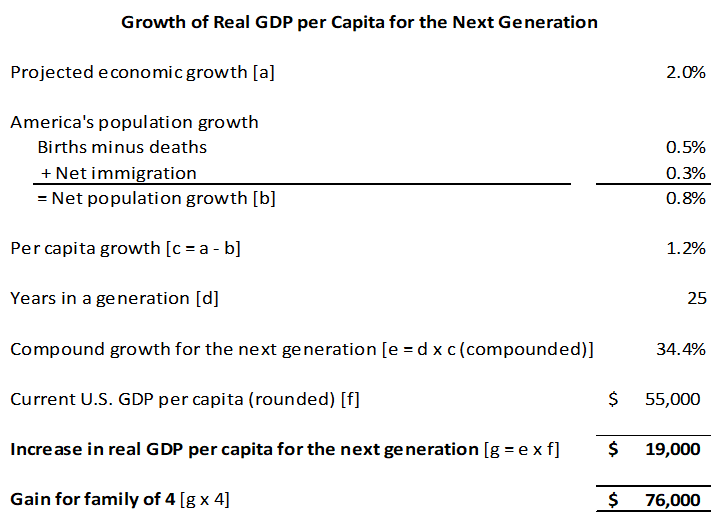 Donald Trump wants to make America great again and Hillary Clinton wants to make America “whole” (whatever that means). And while we all aspire to economic growth greater than 2% per annum, surely an increase of $19,000 in real GDP growth per capita over the next generation doesn’t warrant the gnashing of teeth, rending of garments and shrieking taking place in the blogosphere or on the campaign trail.

Buffett reminds us that, “For 240 years it’s been a terrible mistake to bet against America, and now is no time to start. America’s golden goose of commerce and innovation will continue to lay more and larger golden eggs.”

In America, at least, optimism is the only realism. And it should make a rational investor want to own American’s greatest companies, their stocks that is, for the long-term.

The moral of the story: Pay attention to history, not headlines, when formulating your investment philosophy.