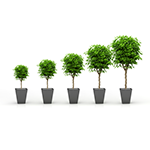 The power of dividend growth is perhaps the most easily understood yet most underappreciated feature of equity investing, and it has profound implications for people who are considering their asset allocation for retirement.  Let’s start with the basics.

Since 1975, when the S&P 500 dividend was about $3.70, dividends have increased over 14x, or at a compounded growth rate of 6.4%.  This is about double the rate of inflation over the same time period.

How and why have dividends compounded at this rate?  Since 1975, the earnings of S&P companies have increased by 21x, or at a compounded growth rate of about 7.3%.  Assuming that companies maintain a steady payout ratio of cash dividends relative to their earnings, it follows that the dividend growth rate should reflect the earnings growth rate.  The charts below illustrate how earnings and dividends have largely followed the same trajectory for the last four decades.

Over time, however, dividend yields have declined as companies return cash to shareholders in the form of both cash dividends and stock buybacks.

According to research by New York University Professor Aswath Damodaran, since 2001 S&P 500 companies have paid out about 85% of their net income as cash, consisting of (i) average dividends payouts of 35.5% plus (ii) average buyback payouts of 49.0%.

The chart from J.P. Morgan below captures the changing sources of equities’ total return over the last seven decades.  Of the 10.9% S&P 500 total average annualized return since 1950, 7.5% is attributable to capital appreciation and 3.4% is attributable to dividends.  For the 13.1% average annualized return from 2010 to 2018, capital appreciation accounted for 10.7% while dividends were responsible for only 2.4%.

In short, primarily for reasons of tax efficiency to their shareholders, American companies are now returning more cash to investors in the form of buybacks than in dividends.

Dividends as a Growing Source of Income

Most people think about risk and safety in terms of principal—the risk that you’ll lose your money and the search for assurance that you won’t.  That’s second nature to us, and it’s probably what’s uppermost in our minds when we think about retirement investing.

Moreover, a common misperception is that there are only two basic investment objectives:  growth and income.  But in modern three-decade retirements, where the maintenance of purchasing power becomes a fundamental objective, there’s a third, very critical, investment objective:  growth of income.

Fixed-income investments—bonds—are just that.  They pay a fixed interest rate, while stock dividends grow over time.

Purely from a purchasing power perspective, it is a better choice to forego the “safety” of clipping bond coupons and instead let the magic of growing dividends provide growth in income over time.

Familiarity bias occurs when an investor has a preference for a well-established paradigm, such as stocks for growth and bonds for income.  This can lead to a suboptimal portfolio and a loss of purchasing power over time.