Which of the two stocks described below would you rather have owned?

These two profiled stocks are one and the same:

But there’s much more to this story, with important implications for individual investors.

According to research from Arizona State University finance professor Hendrik Bessembinder, and as reported in The Wall Street Journal, “From 1926 through 2015, only 30 stocks accounted for one-third of the cumulative wealth generated by the entire U.S. stock market.”  Amazon was one of those 30.

To put that 30-stock number in perspective, there were 25,782 publicly traded companies over that period.

So before you endeavor to find the next Amazon, consider the long odds against you.  The same Journal article notes, “Even though the stock market generates positive average returns over time, more than half of all stocks lose money over their lives as public companies, and the number of stocks that make big money is astonishingly small.” 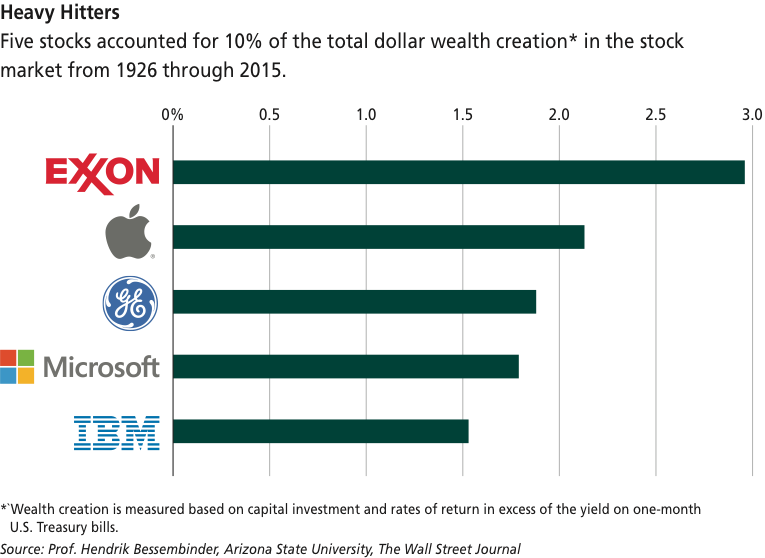 We can also conclude that the odds of finding the next superstock—another Amazon—are exceedingly slim.  And even if one had the investing acumen at the time of Amazon’s IPO to identify it as the investment monster it would become, what’s the chance that same investor would have had the intestinal fortitude to ride out the stomach-churning declines of the ensuing two decades?

Therein lies the great challenge of stock picking:  First, one has to identify a potential winner. Then, one also must have the behavioral discipline to follow one’s convictions.  Out of 100 people, how many would have stayed on the Amazon roller coaster for its entire 20-year ride to enjoy that 49,000% return?  Besides founder Jeff Bezos, there are probably few others.

Fortunately, it isn’t necessary to find the next Amazon to make money by investing in equities.  Instead, one just has to own a market capitalization weighted index fund, which will include a number of potentially loss-making, “grossly overvalued” stocks—like Amazon.

Since large company stocks have historically generated an average return before inflation of 10% annually, the goal of every equity investor should be to earn as close to the market return as possible.  And the equity market return can be achieved, simply, by owning broadly diversified equity index funds, which lets an investor own a little bit of every one of the leading companies in the world.  This is also a bet in favor of humility—of not trying to outperform the market—which history has shown to be a valuable trait.

Hindsight bias is a term used in psychology to explain the tendency of people to overestimate their ability to have predicted an outcome that could not possibly have been predicted.  Believing that one can predict future results can lead to overconfidence, and overconfidence can lead to fatal investment mistakes such as concentrated bets on individual stocks and trying to time the market.