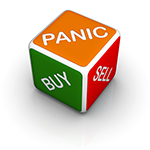 Since 1994, DALBAR, Inc.—a Boston-based research firm specializing in financial services—has published an annual report that “measures the effects of investor decisions to buy, sell and switch into and out of mutual funds over short and long-term timeframes.”

The results: The average investor in an equity mutual fund has consistently earned less than either the performance of the fund or the S&P 500…by a wide margin. How bad is it? Shockingly bad. 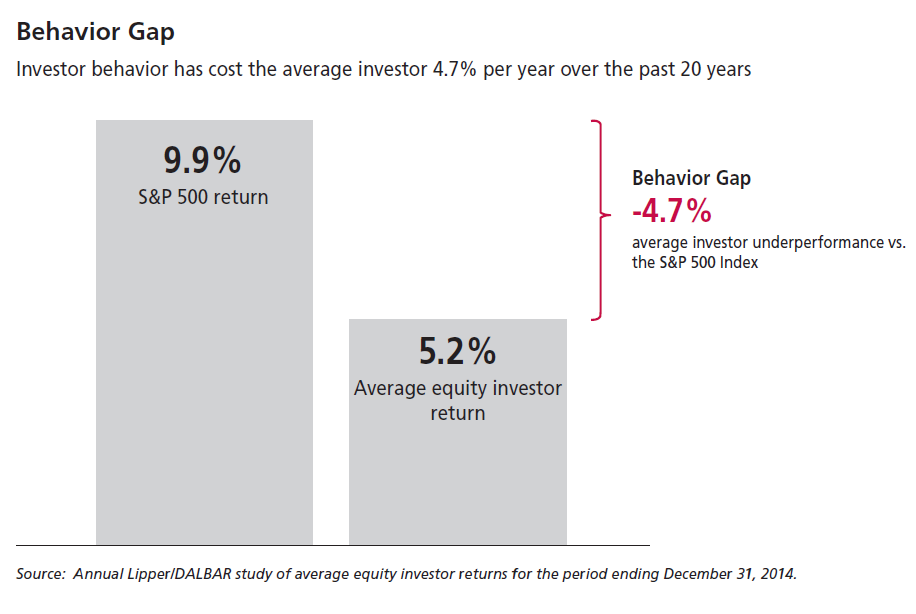 What Causes the Behavior Gap?

In the last 30 years, the three months with the most acute investor underperformance were: October 2008 (-7.4%), March 2000 (-6.1%) and October 1987 (-5.3%). Not surprisingly, those three data points correspond exactly with three times of maximum pessimism and panic in the financial markets: the Great Financial Crisis, the Dot Com Bust and Black Monday, respectively.

Those familiar with the field of behavioral finance will instantly recognize some of the distinctive behaviors identified as part of the catalogue of the underlying causes:

By now, we all know that January was not a good month for the stock market. We experienced the worst first five days of any year ever, and the month ended with a -5% total return for the S&P 500. This was the third consecutive year with a negative January, and the performance was worse than 91% of the last 300 months (i.e., 25 years).

Oh, by the way, January was also volatile. Sixty-eight percent of the trading days had gains or losses of 1% or more compared to an average of 23% of all trading days over the last five years.

So what did mutual fund investors do in January? Why panic, of course. Consider the data from the Investment Company Institute’s official survey of the mutual fund industry: January’s outflow from domestic equity funds was just about $20 billion. This compares to $25 billion in December 2015 and $171 billion for all of 2015 (a year with an S&P price return of -0.7%, and a total return of 1.4%).

And this is no temporary phenomenon. When one looks at a chart that overlays the performance of the S&P 500 with equity mutual fund flows, the correlation is blindingly obvious: dollars follow performance. As a general rule, when the stock market goes down, the investing public reacts by selling equity mutual funds.

With so much bad news to report, January was a glorious month for the financial media. “The worst [x] days” of any given period always makes a great headline.

As an antidote to all this negativity, we thought it might be instructive to put this catalogue of horrible superlatives in historical perspective. According to research by J.P. Morgan Asset Management, a 5% drawdown happens, on average, about four times per year or once per quarter. The table below shows the frequency of different levels of drawdowns and the typical recovery time (in months).

A good investment counselor needs to help put months like January 2016 in context and remind his clients that this too shall pass. January was a great reminder that investor behavior—not investment performance—drives the outcomes experienced by most investors.