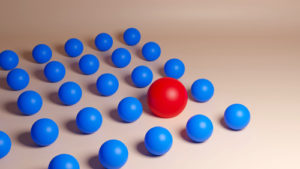 “When we bite into the apple of ‘outperformance’—when the focus of our portfolio shifts from our financial goals to the markets themselves—we commit the original sin, the mother of all mistakes.  And when we give in to that temptation, every classic, return-destroying, soul-murdering behavioral proclivity to which human nature is heir comes rushing into our financial—and even our emotional—life.” –Nick Murray

In the catalog of investment mistakes, a concentrated position holds a special place of dishonor because it is the embodiment of multiple cognitive and behavioral errors.  We’ll simplify the discussion by focusing exclusively on concentrated equity positions, but the same reasoning applies to any holding in any asset class.

A concentrated position occurs when a single stock makes up an outsize portion of a portfolio.  The investor’s wealth becomes concentrated in the single position.  In our book, once a position hits 10% of the portfolio’s value, it’s concentrated.

Diversification, one of the few iron rules of investing, is a risk management strategy that mixes a wide variety of investments within a portfolio in an attempt to limit exposure from any single asset.  Whether you inherited a concentrated position to which you now have a deep emotional attachment, your lottery ticket in a startup company paid off, or another position has simply grown by virtue of solid returns over a period of time, when its percentage in your portfolio becomes too large, it’s time to trim.

“Anything that is huge, profitable, famous, or influential is the result of a tail event—an outlier, one-in-thousands or millions event.  And most of our attention goes to things that are huge, profitable, famous, or influential.  When most of what we pay attention to is the result of a tail, it’s easy to underestimate how rare and powerful tails are.”  So says financial columnist Morgan Housel, and he makes a good point.

Despite their rarity, tails have huge influence.  In a well-diversified portfolio, for example, a small number of large companies will produce most of the long-term returns.  These companies, in turn, usually prosper thanks to a tiny subset of their products, which were conceived by only a few employees.

The lesson here is that while we pay attention to phenomenal success, most of what goes on in the world doesn’t qualify, and so it’s important to get comfortable with failure.  In many cases, failure not only is an option, it’s the norm, and it’s only by trying many different approaches—or owning a wide variety of equities in balanced quantities—that we eventually succeed.

When you hold an overconcentrated stock position, you’re not an investor anymore.  Instead, you’re playing Russian roulette, betting on a very long shot that another iron law—creative destruction—doesn’t apply to you.  In the stock market, as in life, change is constant and nothing is eternal.

Where are the Nifty Fifty of a half-century ago?  These were the so-called “one decision” stocks that you could safely buy and hold forever.  But if you bought and held Polaroid, Burroughs, Control Data, Wang Laboratories and their ilk in the 1960s—and never sold—the end result was awful.

Or how about Enron at the turn of the millennium?  When the flourishing energy firm imploded in an accounting fraud, it took down not only the company but also the personal wealth of many of its employees and Arthur Andersen—one of the top accounting firms in the world at the time.  No stock is great forever.

Investors use a variety of cognitive biases to rationalize buying and holding concentrated positions.

It’s critical to recognize that outperformance doesn’t qualify as a financial goal.  Financial goals define how we want our finances to relate to our lives and our legacies, like an income sufficient to support us comfortably through a multidecade retirement or a tax-efficient transfer of our wealth to our children and grandchildren.  Our cautionary tale in this essay is about the much broader holy grail of the investment world: seeking “alpha”—defined as outperformance—by holding concentrated positions.  In light of the historic returns of mainstream equities over the last century—about 10% per year—there is absolutely no need to do so.