As of the end of April, 62% of the companies in the S&P 500 have now reported Q1 earnings. And the headline is: “Earnings Skid Worst Since Financial Crisis.”

According to Thomson Reuters, the estimated year-over-year earnings decline for Q1 2016 is -6.1% (based on the combination of companies that have reported results thus far and an estimate of the companies yet to report).

Assuming there is a decline in Q1 earnings, this will mark four consecutive quarters of year-over-year declines in earnings. The last time this happened: Q4 2008 to Q3 2009.

The revenue outlook for Q1 is similarly gloomy, with revenue expected to drop for the fifth quarter in a row.

The chart below identifies energy as the wet blanket sector weighing down earnings. But according to Thomson Reuters, “Even excluding energy companies, which are expected to have their worst quarter since oil prices began to plunge in 2014, profits are on pace to fall by 0.5%. Revenues are expected to fall 1.4% overall, or rise 1.7% excluding energy.” 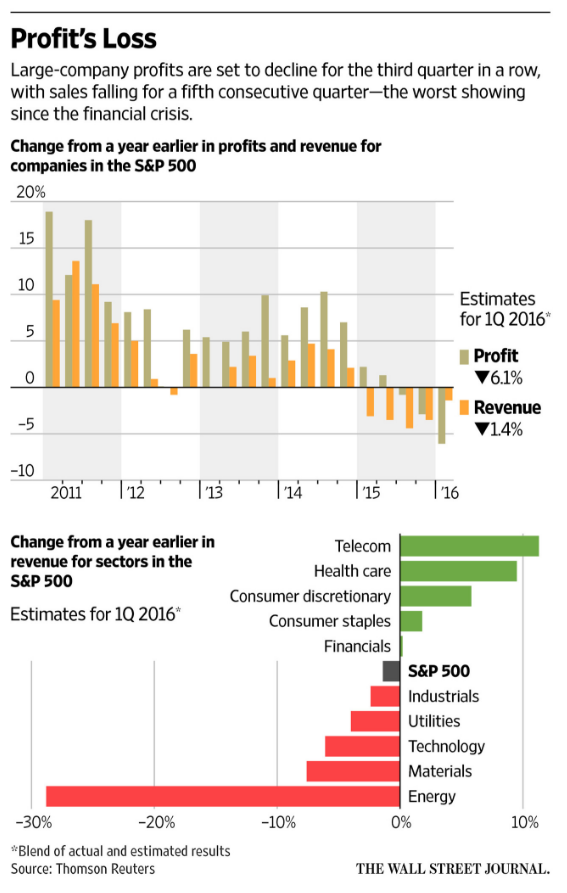 And while the pro forma adjustment to exclude energy is an interesting intellectual exercise to understand what’s happening to corporate profits in the rest of the economy, energy companies still account for about a 7% weighting of the S&P 500.

This combination of a string of earnings declines with corresponding valuation increases brings out the catastrophists in force.

At times like this, it is especially helpful to step back and add some perspective to think about what really matters for the typical investor with a multi-decade time horizon.

In fact, a sound investment plan has nothing to do with current events but is instead grounded in a handful of timeless, bedrock principles, which we think of as the five iron laws of investing.